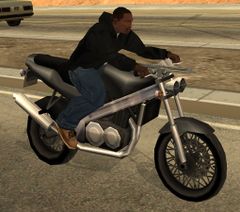 The BF-400 is a motorcycle that appears in Grand Theft Auto: San Andreas.

Based on a Honda VFR400, the bike's design is intended to match its inferior performance in comparison to the PCJ-600, with a slimmer body design, thinner wheels and an older appearance. Like the FCR-900, the bike comes with three different body designs:

The BF-400 is likely the slowest of high-end motorcycles, although it may attain the speed of the PCJ-600, albeit after a longer period of acceleration. Its more compact construction and lighter weight, however, allows the bike to corner better thans its two other counterparts.

Retrieved from ‘https://www.grandtheftwiki.com/index.php?title=BF-400&oldid=407243’
Categories:
Cookies help us deliver our services. By using our services, you agree to our use of cookies.