The Sindacco Family is an Italian-American Mafia family originating from Liberty City and also based in Las Venturas.

In 1992 (the time of Grand Theft Auto: San Andreas), they had territory in Liberty City after Sonny Forelli's death. The Sindaccos also own Caligula's Palace, later alongside the Forelli and Leone families. The Sindacco Family wanted to do business with the Leone family and unite the two organizations and this involved Don Salvatore Leone pledging 5 million dollars to the Sindacco family. Both outfits argued over who should run the casino, and so Ken Rosenberg (once working with the Forelli Family, but then abandoned by the very powerful Vercetti Gang) was put forward as a neutral party. Ken was in the middle of the three families, so if one attacked the other, Ken would most likely be the target of revenge.

The Sindacco family was formerly represented by Johnny Sindacco, who died from shock-induced heart failure in GTA San Andreas after meeting protagonist Carl Johnson for a second time. It was revealed that Johnny had previously been captured by the San Fierro Triads, tied onto a car driven by Carl and scared into revealing information. He then went into a coma, suffering a period of psychological and physical trauma. The Introduction prequel also indicates Johnny is in fact the son of the Sindacco's Don, (who may be Paulie Sindacco), as he mentioned that his father wanted to unite their organization with the Leone family. It is probable that after the Leones abandoned Caligula's Casino and returned to Liberty City, that the Sindaccos would move in.

By the end of 1998, Paulie Sindacco decided to expand further throughout Liberty City, moving into Leone family territory in Chinatown, dealing drugs. In Grand Theft Auto: Liberty City Stories, on orders from Salvatore Leone, Toni Cipriani used Joseph Daniel O'Toole, who was running Paulie's Revue Bar in Liberty City's Red Light District for the Sindacco family, as an inside-man to help weaken the Sindaccos and claim the Red Light District and Paulie's Revue Bar (renamed Sex Club 7 by the Leones) as Leone territory. Later on, Toni Cipriani would kill Paulie Sindacco in 1998. 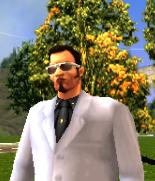 After their defeat by the Leone Family in the first gang war of 1998, the Sindaccos were ceased to only Torrington on Staunton Island, also starting moving into Forelli Family territory in hopes of taking it over. This resulted in the third gang war of 1998, this time between the Sindaccos and the Forellis. Franco Forelli and Paulie Sindacco attempted to establish a truce between the Forelli and Sindacco families, possibly to defeat the Leones together. Before a truce could be created, however, Toni Cipriani uses a remote control device to assume control of Paulie Sindacco's car and run over dozens of Forelli Family members with it. This fueled the Sindacco family war with the Forelli Family, which doesn't end until the assassination of Paulie Sindacco in Shoreside Vale later that same year and the death of Franco Forelli in the Little Italy explosion, all caused by Leone capo Toni Cipriani.

Sindacco Family
GTA III Era gangs
Retrieved from ‘https://www.grandtheftwiki.com/index.php?title=Sindacco_Family&oldid=366313’
Categories:
Cookies help us deliver our services. By using our services, you agree to our use of cookies.