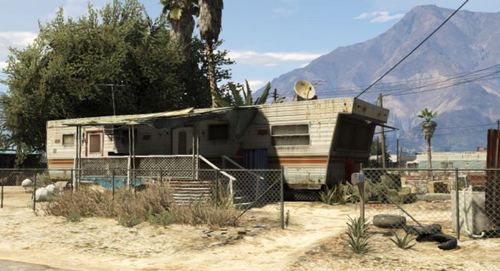 Trevor Philips' Trailer is a trailer owned by Trevor Philips located on Zancudo Ave in Sandy Shores, Blaine County. The trailer is accessible after the mission Mr. Philips but will be inaccessible if the player chooses to kill Trevor. Michael De Santa and Patricia Madrazo live with Trevor in the trailer after Trevor kidnaps Patricia although both leave when she is returned to her husband Martin Madrazo. Ron Jakowski can frequently be found either inside or outside the trailer and is Trevor's neighbour. It is a One Bedroom, One Bathroom Trailer with a one car garage

Trevor Philips, during Mr. Philips, can be seen having sex with Ashley Butler while watching television where he discovers that former friend Michael Townley had not died. Trevor makes plans to locate Michael and to take control of the local drug scene, taking out members of The Lost Brotherhood and the Los Varrios Aztecas, taking control of the airfield in Sandy Shores and destroying the O'Neil farm. Trevor moves back to the trailer with Michael, who he had located in Los Santos, and Patricia Madrazo, wife of Madrazo Cartel leader Martin Madrazo in an attempt to lay low. Trevor again plans his criminal activities there and intercepts a Merryweather Security Consulting plane, robs the Blaine County Savings Bank and derails a train protected by Merryweather. Trevor and Michael later return to Los Santos, after Trevor returned Patricia to her now visibly frightened husband. Trevor, if he is not killed, later meets his mother at his trailer but, upon returning with a stolen truck of Deludamol, finds that she has left.

Retrieved from ‘https://www.grandtheftwiki.com/index.php?title=Trevor_Philips%27_Trailer&oldid=405649’
Categories:
Cookies help us deliver our services. By using our services, you agree to our use of cookies.