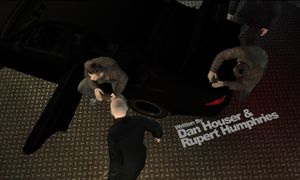 The Triads unloading the heroin from the Platypus.

The heroin is a part of Grand Theft Auto IV's storyline including The Lost and Damned and The Ballad of Gay Tony. Like the diamonds, it also has a large part of the game involving the protagonists Niko Bellic, Johnny Klebitz and Luis Fernando Lopez. Below are scenarios that takes place involving different people that gain possession of the heroin and the heroin itself.

Arrival in Liberty City, and Angels of Death theft

When the Platypus arrived in Liberty City, the heroin, which belonged to the Triads and brought in from the east, was smuggled into the city together with the diamonds and Niko Bellic. The Angels of Death soon stole it, and it was in their hands until Johnny Klebitz and The Lost Brotherhood came, destroyed the AoD clubhouse and stole it themselves.

Elizabeta's assistance to offload it

The Lost, along with Elizabeta Torres tried to offload the heroin, but the deal turned out to be an LCPD sting. Niko Bellic and Playboy X managed to escape, Johnny also escaped with the heroin and took it back to the Lost MC clubhouse.

The Lost MC's attempt to sell it to the Triads

The Lost MC decide they will try and sell the heroin back to the Triads. Billy Grey tells Johnny and Jim to do the deal. Billy had previously conspired with the Triad leader to kill Johnny once he arrived, and while Johnny and Jim are being jumped, the police arrive and arrest Billy. Johnny, Jim and Brian Jeremy escape while the Triads take back their heroin. In a side note, Luis Lopez and Tony Prince had previously met with the Triad leader to discuss some licensing arrangements for the planning department on behalf of Rocco Pelosi.

Phil Bell, an associate of the Pegorino Crime Family hires Niko Bellic to ambush the Triads and steal the heroin before the Triads can offload it. Niko does so and hijacks the truck, then transports it to an abandoned house in Westdyke, where Phil's nephew, Frankie Gallo would "sit" on the heroin until it was safe to sell it. After some time, Niko and Phil went to the house to move the heroin, however, the house was being monitored by the FIB. The three of them fought off numerous members of the NOOSE before hiding the heroin again in a house in Leftwood.

Eventually, Jimmy Pegorino made a deal with Dimitri Rascalov, and joined forces. Pegorino gave all the heroin to Dimitri to sell and asked Niko to accompany Phil when overseeing the deal. Niko is reluctant due to his personal grudge against Dimitri, but Jimmy manages to talk him round. However, Niko is again left unsure when his cousin Roman and girlfriend Kate advise him in opposite directions, Roman urging him to do the deal, with Kate telling him to cut his ties with Dimitri altogether due to his previous betrayal.

Niko then either does the deal, and is again betrayed when Dimitri kills the buyers and steals the heroin, or he takes revenge by ambushing Dimitri on the Platypus, which is being used by the Russians to move the heroin.

If Niko does the deal with Dimitri, Dimitri kills the buyers, takes the heroin and escapes. Phil and Niko pursue one of his men with the money and retrieve it. Dimitri, fearing a retaliation from Niko, sends a hitman to kill him at Roman's wedding, but Roman is killed instead during the struggle. Dimitri then tries to escape, and kills Pegorino in another act of betrayal. Niko then pursues Dimitri to Happiness Island, and after a fire-fight, Dimitri dies of his injuries.

"Deal" effect on The Ballad Of Gay Tony

After Dimitri's death, Bulgarin now has ownership of the heroin at Funland. Luis Lopez goes to Funland in pursuit of Bulgarin, he kills Timur and destroys all the heroin. He then chases and kills Bulgarin on his private jet, which explodes in mid-air.

If Niko chooses to take revenge, he carries out a full-blown assault and slaughters Dimitri's men on the Platypus, which Dimitri is using to import/export the heroin that Pegorino had given him to sell. After killing Dimitri, Niko leaves the scene, and the heroin is left on the ship. Niko's revenge leaves the Pegorinos ruined, without the money or the heroin. Niko then attends Roman's wedding, but Pegorino interferes and tries to kill Niko by firing on the guests, but Kate McReary is killed instead. Niko then pursues Pegorino to Happiness Island, and after a fire-fight, Niko finishes Pegorino with a shot to the head.

"Revenge" effect on The Ballad Of Gay Tony

After Niko killed Dimitri aboard the Platypus, Bulgarin and Timur claimed ownership of the heroin and took it Funland in Broker to be unloaded. Luis carries out an attack and destroys the heroin. He then races to the airport to catch Bulgarin after learning from Timur that he was planning to flee back to Russia. Finally, Luis kills Bulgarin, who drops a grenade causing his jet to explode over Firefly Island.

After the Triads took back their heroin, which they believe is cursed, they later attempt to ship it. The Pegorinos hear about this and so Niko, under orders from Phil Bell steals the heroin and hides it in a abandoned house. When Niko and Phil went to go pick up the heroin, the FIB attempt to bust them. After they escaped the FIB, the Pegorinos ally with the Russians and try to sell it to another Mafia Family. Pegorino gives the heroin to Dimitri who says he has found a buyer. But Dimitri kills the buyers and steals the heroin for himself in the "Deal" ending, whilst in the "Revenge" ending he never gets a chance to try and sell it due to Niko's ambush on the Platypus.

Johnny and the Lost MC steal the heroin from the AoD clubhouse, unaware that the AoD had stole it from the Triads to begin with. First, Johnny arranges for Elizabeta Torres to help him offload it. Elizabeta uses Playboy X and Niko Bellic to oversee the deal. However, it turns out to be an LCPD sting, the three of them escape, and Johnny takes the heroin back to the Lost MC clubhouse. When the Lost MC discover the heroin belonged to the Triads, Billy sends Jim and Johnny to sell it back to them. However, it is revealed that Billy arranged for the Triads to ambush and kill Johnny when he arrived. Johnny and Jim survive the ambush however, and the triads take back their heroin, the the cops show up and arrest Billy and Johnny does not see or hear of the heroin afterwards.

Note the following missions are sorted in chronological order of the timeline.

The Lost and Damned
The Ballad of Gay Tony
Retrieved from ‘https://www.grandtheftwiki.com/index.php?title=Heroin&oldid=378277’
Categories:
Cookies help us deliver our services. By using our services, you agree to our use of cookies.