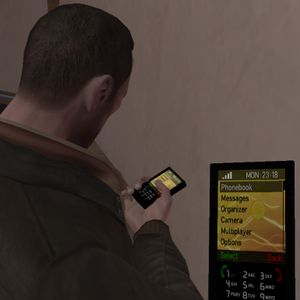 In GTA IV, the player must enter cheats through the cell phone.

Vehicles appear out of thin air and I haven't even been sniffing any glue today!
- in-game website description

Glitches in the network, dial a number and life will change.
- in-game website description

In Grand Theft Auto IV, The Lost and Damned and The Ballad of Gay Tony, cheats are activated by bringing up the phone number pad and typing the cheat phone number into Niko Bellic's, Johnny Klebitz's, or Luis Fernando Lopez's mobile phone. After this has been done once, the cheat will be stored in the phone, and accessible from the "Cheats" menu there. Note that the PlayStation 3 version of GTA IV needs to be updated in order for trophies to work.

Entering some of these cheats in the game will disable certain achievements/trophies only on the active save file; it does not prevent the player from achieving 100% completion. If achievements are blocked, they can be unblocked by loading a save file without blocked achievements. Cheats may have undesired effects on gameplay and can introduce glitches.

Note that cheats that are found in the episodes only work in their respective episodes. They do not work across games.

1* Another cheat to get full health, armor, ammo and repair one's vehicle can be used if the player is driving the Mr. Tasty; cycle through the ice cream jingles (using the horn button) until the GTA IV theme plays, then call the ZiT Service (948-555-0100). Although not documented as such, this will block the achievement/trophy 'Finish Him'.
2* Note that outrunning cops who try to stop the player skipping islands when Niko is in a spawned Jetmax will NOT give the Walk Free achievement but can be obtained later on in the same save file after being killed.
3* If the player has completed all 30 of Stevie's Car theft missions, Stevie will pay cash for almost any car delivered to his garage. Using vehicle-spawning cheats, the player can exploit this arrangement for as much money as he or she wants. Below are the prices of the (eligible) spawnable vehicles; keep in mind that this table is presuming that the car is just spawned and has not taken any damage.
4* When riding around in a cab, entering and using cheats do not block achievements for the 360.

The FIB Buffalo and the Jetmax are unsellable spawn vehicles. The Annihilator cannot fit in Stevie's garage.

Most cars have a low sale value, however driving gently into a wall (enough to scrape the paint) will dramatically improve the value of certain cars. For example, when the Cognoscenti is spawned and sold in perfect condition, Niko will get $8,000; scraping the car against the wall of the garage while entering will change the payout to the full retail value, $10,500 (some have reported the value further increasing to $10,800). Presumably this is a game bug.

This list of phone numbers can be found at The Lost's clubhouse in Acter or on the Lost MC website, in the form of a flier listing the vehicles either for sale or as a prize for a contest.

These are the cheats introduced in The Ballad of Gay Tony. The Advanced Weapons Set cheat replaces the one from GTA IV.

The Lost and Damned
The Ballad of Gay Tony

Retrieved from ‘https://www.grandtheftwiki.com/index.php?title=Cheats_in_GTA_IV&oldid=415733’
Categories:
Cookies help us deliver our services. By using our services, you agree to our use of cookies.