In Grand Theft Auto V, weapons are an essential part of the game. As of the Last Team Standing Update, there are up to 45 weapons available in GTA V. 29 weapons are available within the base game while the remainder require the installation of downloadable content. Similar to Grand Theft Auto IV, weapons spawns are located in inconspicuous and hard to reach places, and weapons dropped by fallen enemies lie realistically on the ground, glowing to catch the player's eye. Also, like GTA IV, the player buys a firearm one time, then pays a smaller amount for additional ammunition. Unlike previous games, the player can hold more than one weapon for each weapons category, and if the player runs out of ammunition, the firearm is not discarded.

The player can customize their firearms at any Ammu-Nation. Modifications greatly affect a weapon's performance, especially when multiple mods are used in tandem. Certain firearms can accept multiple modifications, while others may have no other customization options besides changing the tint. 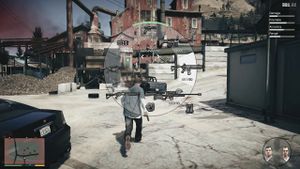 GTA V introduces a weapons selection wheel similar to Red Dead Redemption and Max Payne 3. In previous GTA games, the player had to scroll through each weapons category to select a weapon, although GTA IV introduced a quick-select feature for certain weapons. Except for projectile and heavy weapons, weapons in each category share the same pool of ammunition. When selecting a weapon, information on which attachments are equipped are displayed within the wheel itself, while its attributes (damage, rate of fire, accuracy and range) are given in the upper right corner of the screen.

Retrieved from ‘https://www.grandtheftwiki.com/index.php?title=Weapons_in_GTA_V&oldid=409106’
Categories:
Cookies help us deliver our services. By using our services, you agree to our use of cookies.