Throughout its appearances before GTA IV, the Squalo is depicted with a long sleek hull, and, in GTA Vice City and GTA San Andreas, are specifically given "Squalo II" and "Squalo III" names, respectively, suggesting a series of Squalos were released over time. Renditions of the Squalo in GTA IV and GTA V, on the other hand, assumes a more curved and modern design, but is comparably shorter than its earlier counterparts. The Squalo is initially given a distinctive spoiler mounted over the occupants' seats in GTA Vice City, but was not present in the GTA San Andreas rendition. GTA Vice City Stories saw the return of the spoiler, while GTA IV features Squalos with or without a spoiler. Color variations may also vary between games. In its original appearance in GTA Vice City, the boat comes with a combination of a constant white with a variable bright color, while later renditions feature more flexible color choices.

The Squalo is difficult to obtain, as the player is required to purchase a property, complete a set of missions, or complete Boat School, as GTA Vice City and GTA San Andreas has demonstrated.

The Squalo's sleek design is matched by its performance. One of the boat's merits is its acceleration and top speed, which is the result of power motors as well as a streamlined hull that allows the boat to be propelled into the air, avoiding as much drag from contact with water as possible; the boat is also capable of turning in a dime when the throttle is applied as the front half of the hull is launched off the water, reducing the amount of mass underwater to steer.

In reality, the Squalo's speed in GTA Vice City, GTA San Andreas and GTA Vice City Stories is not superior to that of the (Cuban) Jetmax, being only second to the Jetmax. While playtests and examination of internal files reveal the Jetmax is faster, misconception of the boat's performance arises in a GTA Vice City mission, "The Fastest Boat", during which Ricardo Diaz claims a Squalo which he wants is the "fastest boat".

The Squalo's performance in GTA IV ranks higher than the Jetmax, as the Jetmax was redesigned in with a less efficient design, while the Squalo retains its ability to maintain minimal contact with the surface of water as well as being shorter and lighter. 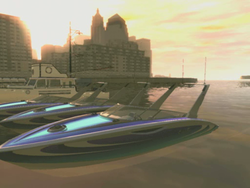 An early pre-release GTA IV Squalo (depicting a completely different paintwork), as seen on the television in GTA IV.

Retrieved from ‘https://www.grandtheftwiki.com/index.php?title=Squalo&oldid=409036’
Categories:
Cookies help us deliver our services. By using our services, you agree to our use of cookies.