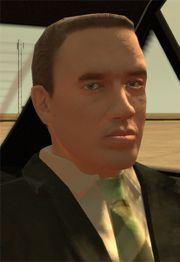 One possible depiction of Arthur Stubbs in The Lost and Damned. His character model differs slightly in each appearance.

Arthur Stubbs is a minor character in The Lost and Damned.

Arthur Stubbs is the uncle of Thomas Stubbs III, being part of the Stubbs political elites who is painted as a prominent civil rights activist, humanitarian and a member of a secret society, but yet is stated to only be "a passionate democrat when it suited him" and is an "elitist who hated poor people".

During "Politics", Arthur arrives in Liberty City to attend a family meeting regarding the matter of aiding "rich people people upset by the recent problems at The Exchange". Thomas orders Johnny Klebitz to kill him as he arrives at Francis International Airport in order to secure Arthur's fortune for his re-election, ordering Johnny to stage the killing as if it is a terrorist attack to avoid being implicated.

News reports provide conflicting accounts of Stubbs' age. A Weazel News report covering his assassination describes him as being 78 years old, while the Liberty Tree website's article refers to him as a 83-year old. Nevertheless, his physical appearance during "Politics" is much younger than what both reports indicate. Indeed, his character model is merely that of a generic business suit-clad pedestrian model commonly found in lower Algonquin.

Retrieved from ‘https://www.grandtheftwiki.com/index.php?title=Arthur_Stubbs&oldid=390230’
Categories:
Cookies help us deliver our services. By using our services, you agree to our use of cookies.