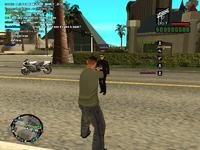 San Andreas Multiplayer started life as a multiplayer modification for GTA Vice City, dubbed Vice City Multiplayer (VC:MP) towards the start of April, 2005. It was decided that VC:MP would be worked on as a codebase for SA:MP, due to the fact the upcoming San Andreas game was not released at the time the team started working. The team consisted of some well known members of the GTA modding community, and was led by kyeman - a prominent figure in the GTA Modding community. Offering preview videos and screenshots showing the status of the development work that was being done quickly gained the mod a large fanbase within the GTA community, with its small forums attracting approximately 120 users before it switched to a new home. After a couple of public beta tests gathering an extremely high amount of interest (so high that long waits were common to get a slot on the beta servers) VC:MP was finally released to a warm reception and has since progressed from v0.1 to v0.1d, with an open-source code release in the progress. This source has now been used by another community member to progress with VC:MP as the main team work on SA:MP.

Once San Andreas had been released for the PC on Jun 10, 2005 work continued in the same way as it did for VC:MP - by working away in private and periodically releasing screenshots and videos on their website, and answering peoples questions via their forums (which eventually changed from their small hosting to a subforum on the largest GTA community, GTANet/GTA Forums, which also hosted the IRC channel). All was going as it would have expected, until something unexpected and un-welcomed by the community happened: the Development team decided that, to keep San Andreas the way it was meant to be played, that the mod would have a total shift in development path - instead of having a Multiplayer supporting a large number of players in a Deathmatch style, they would instead change it entirely to a Co-Op style mod supporting 6 players. Their idea was that you would be able to play much like single player - with pedestrians, cops chasing you, and following the ever changing storyline - but with 5 of your friends doing it with you. It was a very novel idea, but it was widely rejected by the community and the new forums at GTANet where filled with hate towards the SA:MP development team, no matter how much the team tried to promote the idea. With a large project such as this one, which requires community backing, things did not look well.

On Sept 18 2005 kyeman, the lead coder and the head of the team, left in the middle of the Co-Op debate due to work commitments making it impossible for him to progress on the mod. He handed over all the existing work so far to the 2nd main coder, spooky, who took control of development work and rebranded the project's name to GTA:Multiplayer (GTA:M) to signify the new change in management.

Around a month later, kyeman had sorted out his personal life and decided to start helping out the team with a few things. He didn't announce it as a comeback, rather that he would just be helping with any difficulties the team had to ensure work on his codebase carried on, and to keep the faith within the community. The idea of co-op was also scrapped during this time, due to technical limitations, and also the disappointing feedback received from the once eager community, and eventually kyeman officially rejoined the team and took charge of proceedings again.

Once everything had been sorted out in regards to kyeman returning to take charge and the direction of development changing back to its original intention of a large deathmatch-style game, the official name of the project was changed back to San Andreas Multiplayer to avoid confusion, and also to avoid any legal implications with Rockstar Games regarding the use of the trademark "Grand Theft Auto."

There are a wide variety of the so called gamemodes in San Andreas Multiplayer due to the innovative PAWN scripting engine the game uses, allowing any user to create whole missions within the San Andreas map, and used by the server in a special file format - much the same way a 'normal' game would have individual levels for the same mode of gameplay. Some of the styles of gameplay featured by SA:MP are Assault (Attack/Defend), Capture The Flag (in the form of capture the opposing teams car, boat, bike or plane), Team Deathmatch, Deathmatch, Racing or even modes where to win you must be the player with most money (gained by gambling or killing other players). There also is the option of general 'freeroam' gamemodes, where you can do as you wish and follow your own objective.

Creating gamemodes can be anything from simply placing co-ordinates (co-ords) into the PAWNO editor and compiling to creating fully-fledged missions with progressing spawn points, various objectives, and custom in-game commands

Unlike SA:MP itself, the server version of SA:MP does not require the game to run. The server software is available for both Windows and Unix like systems, at the official site.

There are a number of bugs and flaws in the modification, but this has to be expected due to the fact that the multiplayer is 'shoehorned' into the game without any access to the games original source code. "Hit registration" has been described as poor by some players which is a problem with an online game which many players like to play competitively. Some complaints have also been made about the powerful PAWN scripting engine being hard to use for people with no previous experience of coding (in areas/languages such as C++) who would like to make their own gamemodes to run on their servers. There also are a large number of bugs, but due to the fact the modification has only been released recently this would be expected. There also is a dedicated bug reporting system which implies the bugs will all be worked out eventually, with some already flagged as 'fixed'.

Retrieved from ‘https://www.grandtheftwiki.com/index.php?title=San_Andreas_Multiplayer&oldid=366158’
Categories:
Cookies help us deliver our services. By using our services, you agree to our use of cookies.