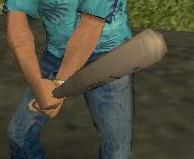 Big Smoke from GTA San Andreas is seen using a wooden bat instead of the aluminum one featured in the introduction mission and "Running Dog," which he used to take out a Vagos gang member. It also produces a wooden sound when Big Smoke dropped the bat.

In GTA IV, the Baseball Bat can be purchased at the back-alley gun shops for $5. It can not be purchased from Little Jacob. This is a pretty good weapon for attacking people at point-blank range, but the knife is better for speed at closer range. A blow to the head with the bat can knock out or kill the victim. In an early version of GTA IV, a wooden baseball bat appeared

In The Lost and Damned, the bat is used to hit other racers during motorcycle races. Malc will always provide Johnny Klebitz with a bat at the start of each race. This is the first time a melee weapon is available for use while riding a vehicle.

Retrieved from ‘https://www.grandtheftwiki.com/index.php?title=Baseball_Bat&oldid=399866’
Categories:
Cookies help us deliver our services. By using our services, you agree to our use of cookies.