The name Ammu-Nation is a portmanteau of ammunition and nation, which implies the store is patriotic. The store opened in 1962.

The chain is absent in Grand Theft Auto IV, explained to have been shut down as a result of strict gun control laws passed by then mayor Julio Ochoa. As alternatives, players may either purchase weapon from illegally operating gun shops or out of the back of mobile gun cars. In Grand Theft Auto: Chinatown Wars, Ammu-Nation resurfaces but has shifted its operations online. The chain returns in Grand Theft Auto V.

Weapons are bought by walking over a floating weapon pickup inside Ammu-Nation stores. When the player enters the store, the camera switches to a fixed position at the corner of the store until the player exits the store. The clerks carry Shotguns and will attack the player if the player is aggressive (i.e. the player shoots the clerk with any kind of firearm).

Ammu-Nation is featured in GTA III's official website in the Portland section of the website. It includes an audio advertisement and a pop-up to Ammu-Nation's website.

Weapons are bought by standing in the pink marker inside Ammu-Nation stores. Each clerk at each store carries a different weapon which include the Mac (Ocean Beach), Uz-I (North Point Mall) and .357 (Downtown).

Ammu-Nation seems to have connections with Mr. Black and his contract killing company, since during a mission in GTA Vice City, protagonist Tommy Vercetti is hired to kill a business man, steal a briefcase he is carrying and deliver it to the owner of an Ammu-Nation local in Downtown.

Weapons are bought by standing on the red marker inside Ammu-Nation stores. A menu to choose the weapon is displayed. The player can preview the weapon by selecting the weapon without buying it and the clerk will bring up the weapon to display. Ammu-Nations only open up after the mission Doberman. All clerks wield dual Pistols and will open fire if the player shoots inside the store or aims their gun at him.

There are a total of four different Ammu-Nation interiors, of which three feature shooting ranges. There is also an unused interior which features two floors and can only be entered using certain cheats or with cheat devices. The store is otherwise functional if entered properly.

Weapons are bought by standing on the marker in front of Ammu-Nation stores. The game pauses and a menu appears to let the player purchase weapons. The store itself cannot be entered so no clerk appears in this game.

Ammu-Nation stores in GTA Liberty City Stories distinctively combines design traits from both GTA III's and GTA Vice City's Ammu-Nation. Just like in GTA III, the same fixed camera view returns which makes the players unable to use first person view weapons like Sniper Rifle or Rocket Launcher; however, the game requires the player stand on the yellow marker in front of the counter to purchase weapons, and utilizes GTA Vice City's weapon selection system. Clerks carry shotguns and will attack the player if aimed at or the player fires a weapon inside the store.

Ammu-Nation is featured in GTA Liberty City Stories's official website in an e-mail under the name "Y2K is Coming!"

In Grand Theft Auto: Chinatown Wars, there are no stores, but weapons can be purchased on the Ammu-nation website via the PDA that will be delivered to the nearest safehouse.

Ammu-Nation scratch cards can also be purchased at various stores, and the player can win body armor or various weapons. Ammu-Nation apparantly sponsors a "Guns For Ca$h" amnesty program with the LCPD, although the player cannot make use of this.

Ammu-Nation returns as an in-game store in Grand Theft Auto V. Like its previous appearances, players are able to purchase different types of weapons. For this appearance, players can also customize different weapons with different modifications, like suppressors, extended magazines, fore grips, scopes and sights, color tints for different weapons, etc. The company has stores in Vinewood in the Vinewood Plaza shopping center, Chumash in Chumash Plaza, Paleto Bay, Cypress Flats and Pillbox Hill, Los Santos and one in Sandy Shores, Blaine County.

Shooting ranges can be found in some Ammu-Nations throughout the GTA III series and in GTA V. These places test your skill in handling your weapons, and can be used simply to improve gun handling skills. Passing the shooting ranges offers the player a small sum of money as a reward, and completion of a shooting range is often necessary for 100% completion of the game.

An Ammu-Nation advertisement in GTA III.

Ammu-Nation radio commercials make it clear that the store is run with with a right-wing paranoia philosophy, describing itself as the "store leading the fight against communism". The store also seems to promote the purchase of its products for illegal purposes, even suggesting they be used to kill one's mother-in-law if she is "being a bitch". There is also one in Grand Theft Auto: Vice City that mentions an anti-aircraft gun 'actually used when we whooped Australia's ass!'

In Grand Theft Auto: Vice City Stories, there is an Ammu-Nation radio commercial about Saturday Safety Fun With Guns with Derek the Dodo. 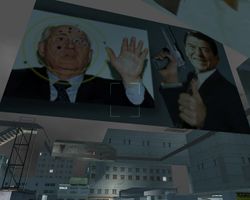 The hidden Ronald Reagan imagery found within the walls of the Downtown Ammu-Nation in GTA Vice City.