In GTA San Andreas the Slamvan resembles a heavily customized 1967-1972 GMC C/K, in fact, it appears to be based on Jim Bayne's customized 1968 GMC truck. The truck may also appear with a custom chain steering wheel. Like other lowriders in the game, certain traffic-spawned Slamvan's may come readily equipped with hydraulics. Slamvans equipped with hydraulics can be used to enter the Lowrider Challenge at Unity Station, Los Santos.

The Slamvan road-going merit lies in its raw power; the truck has good acceleration and can reach very high top speeds along a straightway - especially with nitrous equipped, and is easy to stop and corner due to its lighter weight. However, its long wheelbase makes it slightly harder to corner at high speeds as the truck is vulnerable to spinouts. Naturally, the Slamvan, being a two-seater, only has room for two people; it also raises the player's sex appeal to over 60%.

Being a lowrider, Slamvan's in GTA San Andreas may be modified further at Loco Low Co. in Willowfield, Los Santos. The selections of customizations offered for the Slamvan is wide-ranging, boasting unique paintjobs and unique body enhancements, including distinctive chrome trims and "wheelcovers" or wheel skirts, making the Slamvan the only vehicle in GTA San Andreas with optional wheel skirts. 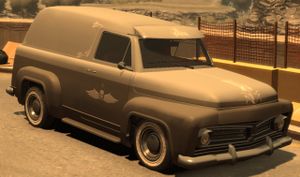 A Slamvan in The Lost And Damned (Rear quarter view, with black body and red rims.).

While retaining a low-riding appearance with a lowered front end, The Lost and Damned's Vapid Slamvan assumes the design of a 1950s panel van based on a 1953–1956 Ford F-Series van with some mild custom features, but awkwardly appears to have the windshield and door tops from a 1980s Ford F-Series.

The Slamvan is very similar to The Lost and Damned's Towtruck, which is a Heavy Duty truck variant of the same make it is based on, but features a more aggressive radiator grille and headlight cluster design and an interior (derived from the Rancher) with a red color scheme and classic steering wheel (in comparison to the Towtruck's brown, worn-out interior).

The van comes in only four color schemes, one of which is a two-tone gray body color, and another encompasses a black body with red outer rims. The Slamvan also bears The Lost MC's insignias. Slamvan lacks any model and brand badges, but police radio chatter will refer the van as the "Vapid Slamvan".

The Slamvan's performance is below average, being attributed largely by its poor acceleration, although the van can achieve average speeds, its top speed being 130 km/h or 81 mph. The van's rear wheel torque also makes the van prone to burnouts, but is capable of relatively good cornering and braking, presumably because of its lighter weight.

Unlike most lowriders, the Slamvan is more common in affluent areas, being more commonly found in western Los Santos, western San Fierro, and the casino districts of Las Venturas.

Retrieved from ‘https://www.grandtheftwiki.com/index.php?title=Slamvan&oldid=411772’
Categories:
Cookies help us deliver our services. By using our services, you agree to our use of cookies.