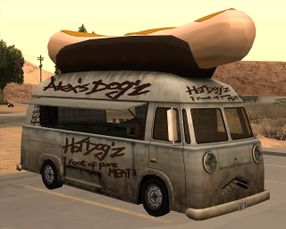 The Hotdog is a mobile catering vehicle in Grand Theft Auto: San Andreas.

Designed as a large, old van with with an oversized roof-mounted hotdog, the Hotdog is a hotdog van that can usually be found at special events, or generally at places where people need food. By walking into the red marker, the player may buy a hotdog from the van to replenish their health.

The van can be stolen and driven around by the player, while the hot dog vendor inside cowers in fear, thus disabling the food stall. However, the vehicle's poor performance, characterized by its slow acceleration, speed and heavy handling, makes the Hotdog an unpractical vehicle for demanding driving, although its size and weight makes the vehicle more resilient to damage, as most large vehicles do.

Retrieved from ‘https://www.grandtheftwiki.com/index.php?title=Hotdog&oldid=375618’
Categories:
Cookies help us deliver our services. By using our services, you agree to our use of cookies.