The icon for the Spray Can.

The Spray Can is a weapon in Grand Theft Auto: San Andreas that has different uses. The weapon is introduced to the player in the mission Tagging Up Turf. The Spray Can is used primarily for spraying over other gang's graffiti, such as the Los Santos Vagos and Ballas. It can also be used for killing someone by spraying onto a person. It chokes them until they are dead, but it isn't very useful for a lot of threats. 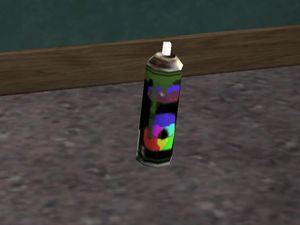 Spray can in the Johnson house.

Retrieved from ‘https://www.grandtheftwiki.com/index.php?title=Spray_Can&oldid=350122’
Categories:
Cookies help us deliver our services. By using our services, you agree to our use of cookies.