"Supposedly illegal. Banned for civillian use. Have been appearing on the streets of Vice City for several years. Present extreme danger to public order. I though we had sold all of these things to corrupt dictators and people fighting the Russians?"
-Vice City Bureau of Investigation file description. 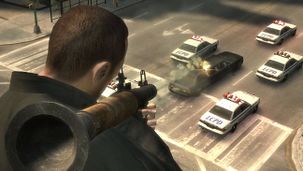 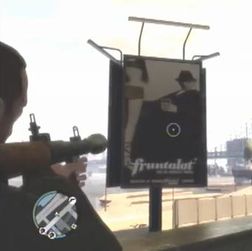 Aiming with a rocket launcher in Grand Theft Auto IV.

The Rocket Launcher or RPG is a weapon that has appeared in every Grand Theft Auto game.

The Rocket Launcher is an extremely powerful weapon, capable of destroying almost anything capable of being damaged. The chief advantage of this weapon is its destructive power and area effect (with its blast being capable of inflicting heavy damage several meters away from the point of impact). Although its rockets self-destruct after traveling a certain distance, its range remains impressive. The weapon's disadvantages are its slow aiming, and its potential to seriously injure or kill the operator if a rocket detonates at close range.

The first two games' rendition of the Rocket Launcher is relatively hard-to-find, with the ability to destroy most cars with one shot, a fairly long reload time, and perfect accuracy. Once fired, each rocket stays at a constant velocity until it reaches a solid surface (a person, a vehicle, or a wall). Strangely enough, rockets are faster than bullets, requiring some skill to dodge (as opposed to bullets).

In Grand Theft Auto IV, the rocket launcher again resembles the Russian RPG-7 portable anti-tank grenade launcher; however, it is not fitted with the PGO-7 optical sight usually seen on the launchers. Unlike previous games where the player was forced into a stationary first-person perspective, the player now aims the rocket launcher from the over-the-shoulder perspective, allowing the player to strafe while aiming; the rocket launcher can also be fired while behind cover. The rocket can be deflected if the tip of the rocket does not hit a solid object. The rocket self-detonates when it reaches its maximum range. This is the most powerful weapon in the game, destroying any target with a direct hit and causing heavy causalities with splash damage. The player does not necessarily need a direct hit on the fuselage of a helicopter to destroy it as the force of a detonating rocket can cause the pilot to lose control and crash. Also, unlike the GTA III Era, the rocket can hit the rotors as they considered solid objects. The RPG in GTA IV & EFLC is the only weapon with moving models (the rocket and the empty launcher).

The Rocket Launcher can be purchased at the back-alley gun shops for $15,000 plus $5,000 for each additional rocket. The Rocket Launcher cannot be bought from Little Jacob in GTA IV; however, the player can buy a Rocket Launcher from Terry Thorpe in The Lost and Damned or from Armando Torres in The Ballad of Gay Tony for $10,000 plus $3,500 for each additional rocket. The player is limited to a carrying capacity of 8 rockets. This weapon is available in multiplayer via helicopters, which instantly give players a RPG and full RPG ammo upon entry. The rocket launcher's scarcity, late availability, low carrying capacity, and high price means that the player should use the weapon with discretion.

(To show your coordinates you have to enter a cheat code.)

The Ballad Of Gay Tony

Retrieved from ‘https://www.grandtheftwiki.com/index.php?title=Rocket_Launcher&oldid=415374’
Categories:
Cookies help us deliver our services. By using our services, you agree to our use of cookies.