The Patrol is generally used as a patrol vehicle rather than a pursuit vehicle, due to it being slower and heavier than the Police Cruiser (the acceleration is about the same); despite its supposed role, the car is as common as the Cruiser, appearing relatively frequently as a traffic vehicle. Like the Cruiser, the Patrol's livery is clearly based on that of the New York Police Department's vehicles, and is equipped with an interactive police computer. The Police Patrol's front is modeled after the eighth generation Chevrolet Impala Police Edition while the back is from the ninth generation.

In GTA Chinatown Wars, the Patrol bears LAPD-style markings, rather than the NYPD style, making the car more immediately recognizable as a police car; the car also incorporate GTA IV's police computer for use in vigilante side missions. In cutscences, it is depicted with omitted rear quarter glasses. 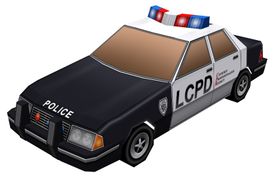 A rendering of the papercraft "Police Car" from the GTA Chinatown Wars section of the Rockstar Games Social Club.
Retrieved from ‘https://www.grandtheftwiki.com/index.php?title=Police_Patrol&oldid=361034’
Categories:
Cookies help us deliver our services. By using our services, you agree to our use of cookies.