The London renditions of the Ranger, with a top-down profile similar to a Land Rover 109" Series II, are essentially 4x4s comparable to Grand Theft Auto 1's 4x4 and Repair Van, reflecting off-road vehicles of the games' era and setting. Despite its use by civilians, the Ranger only appears with a green body and a white roof. Like the Repair Van, it also features a front-lid mounted spare tire, similar to a Land Rover.

In GTA San Andreas, the Ranger is depicted as police-issued Ranchers that are outfitted with sirens, light bars, radio antennas, and a camper shell/criminal-hold in the back. Its color scheme is also distinctive from "panda" paintwork seen on standard police cars in the game, featuring a white hood, a black roof and a white camper shell.

GTA London's Ranger is a somewhat lumbering vehicle, with average top speed but below-average acceleration, bulky weight, poor brakes and poor handling. However, the Ranger does have one of the fastest maximum reversing speed, on par with the Beagle 3. The Ranger's base export value is £500 if delivered in perfect condition.

GTA San Andreas's Ranger handles almost the same as the original Rancher. It is slightly faster, and has slightly larger ground clearance, It also has a slightly more durable body and can sustain more damage than the Rancher. It is a great off-road vehicle and can drive on rocks. Despite this, because of weight and little traction, it isn't the best vehicle for hill climbing. Doing so will often cause it to tip over, falling down the mountain. Immediate, simultaneous sharp turns made at high speeds can also often cause it to tip over. 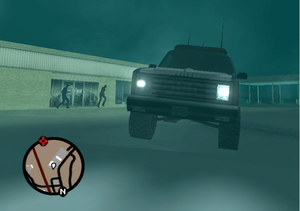 The irregular headlights of the Ranger in Grand Theft Auto: San Andreas.

Retrieved from ‘https://www.grandtheftwiki.com/index.php?title=Ranger&oldid=369755’
Categories:
Cookies help us deliver our services. By using our services, you agree to our use of cookies.