Vincenzo "Lucky" Cilli is a member of the Leone Family and Salvatore Leone's current consigliere in the beginning of Grand Theft Auto: Liberty City Stories. He is voiced by Joe Lo Truglio.

Vincenzo Cilli was likely born in Liberty City and, at some point, joined the Leone Family, later taking advantage of Toni Cipriani's absence to rise within the family. By 1998, Vincenzo has become clean-cut and educated, everything Toni is not, and may have been busy feeding poison in Salvatore Leone's ear to make him distrust Toni upon his return to the city. Toni despises Vincenzo on sight.

Despite his upbringing, Vincenzo is an immature punk who loves ordering Toni around, which infuriates Toni. Now Toni is forced to perform various jobs for Vincenzo, who shows him virtually no respect. When Toni begins to rise too high in the Leone hierarchy for Vincenzo's liking. Vincenzo sends him to pick up his car a few blocks from his office in Trenton and bring it to his lock up in Saint Mark's. The car is being watched by police; Toni is nearly caught in an ambush. An irate Toni answers Vincenzo's phone call and responds by stating that he quits working for Vincenzo. He then takes Vincenzo's car to the crusher in Harwood and destroys it.

Later on, when Toni is back in Sal's good graces, Vincenzo wants a truce, asking Toni to meet him in the bowels of a docked ship near his hideout in Atlantic Quays. This is an ambush, where Toni is assaulted by several chainsaw-wielding Leone henchmen loyal to Vincenzo. Upon killing them all, Vincenzo emerges with an Micro-SMG, only to be killed by Toni after he explains his new found jealousy. 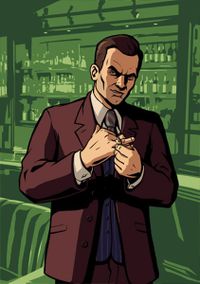 On his gravestone in the Liberty City Cemetery, it says "Not so lucky after all". His luck is only commented once; in the opening cutscene of Liberty City Stories, when Toni is inside Sal's office, Sal says: "Need money, Lucky here will take care of it".

Retrieved from ‘https://www.grandtheftwiki.com/index.php?title=Vincenzo_Cilli&oldid=394304’
Categories:
Cookies help us deliver our services. By using our services, you agree to our use of cookies.