Not to be confused with V8 Ghost, a 2-door car in Grand Theft Auto: Liberty City Stories. 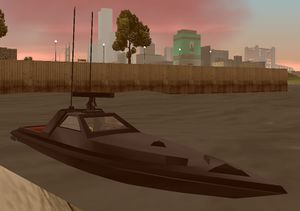 The Ghost obtained from "Gone Fishing", as seen in the PC and Xbox version in GTA III. 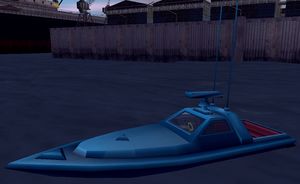 A PC version recreation of the Ghost in its PS2 form, showing the police blue texture.

The Ghost (or GHOST missing) is a modified variant of the Predator police boat in Grand Theft Auto III.

While largely similar to the Predator, the Ghost noticeably lacks the Predator's twin machine gun emplacements but outperforms the Predator in speed and turning.

The boat appears only during the mission "Gone Fishing", in which the player is tasked to kill a target at sea, who attempts to escape using the boat. However, if the player chases the boat long enough, the boat will run ashore from which Claude can kill him. If the player does this they can shove the boat back into the water and drive it.

The boat's default color is police car blue, however it is spawned in an unique black color in the PC and Xbox versions of "Gone Fishing".

Retrieved from ‘https://www.grandtheftwiki.com/index.php?title=Ghost&oldid=379287’
Categories:
Cookies help us deliver our services. By using our services, you agree to our use of cookies.