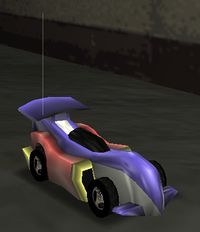 The RC Bandit (also known simply as the RC, RC Car or RC Buggy in Grand Theft Auto III) is a small remote controlled car that is available for use in several missions in:

Performance of the vehicle is as expected; being small and light, the RC Bandit is highly nimble with excellent acceleration, but has a low top speed. Because the RC Bandit in GTA III to GTA San Andreas features very stiff suspensions, the cars are susceptible to rollovers on bumpy terrain. The GTA Liberty City Stories rendition, however, receives performance tweaks, including a slightly improved top speed and soft suspensions that allow it to traverse uneven terrain much better.

Retrieved from ‘https://www.grandtheftwiki.com/index.php?title=RC_Bandit&oldid=361960’
Categories:
Cookies help us deliver our services. By using our services, you agree to our use of cookies.