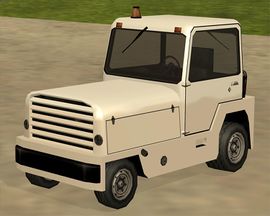 The Tug is an all purpose tug featured in Grand Theft Auto: San Andreas.

The Tug is designed as a haul-pulling tug similar to the game's Baggage, except the Tug is far more compact and enclosed, with only one seat, no cargo hold (the Tug only carries a fire extinguisher in the rear), and a closed driver compartment; like the Baggage, however, the Tug is also consistently painted white. While featuring a stationary tow hitch similar to the Baggage, it is not capable of towing anything. Contrary to its appearance, the Tug has a high overall speed but low acceleration.

It can be assumed the Tug is adopted for used in other locations other than airports, as it is also present in an underground government base.

Retrieved from ‘https://www.grandtheftwiki.com/index.php?title=Tug&oldid=363760’
Categories:
Cookies help us deliver our services. By using our services, you agree to our use of cookies.