The Grand Theft Auto World is a fictional world containing the settings or otherwise-mentioned locations of all the GTA games (for example, Liberty City, Vice City, Carcer City, and the state of San Andreas). It is assumed that the rest of the real world exists within the fictional world, although possibly without some of the major cities to which the GTA locations are analogous (Liberty City/state of Liberty may replace New York City/state of New York, for example). Continuity is generally retained throughout the games, creating a coherent fictional universe.

A map selection screen in the first Grand Theft Auto game reveals that the contemporary renditions of Liberty City, San Andreas, and Vice City are located in or near New York, California, and Florida respectively. It is unclear whether these locations are canon with the rest of the series, however it is known that Vice City is located in Florida. Furthermore, during one mission in GTA San Andreas, the player could fly a plane eastwards and arrive, after a cut scene, in Liberty City. This relationship is similar to the real-world geographical placing of the states of California and Nevada (upon which San Andreas is based) to New York (upon which Liberty City is based). This does involve crossing a vast body of water, but bodies of water are used to isolate game-worlds in the GTA series, and do not necessarily indicate that these game-worlds are truly islands.

These cities, islands, states and countries are featured in at least one official Grand Theft Auto game as a playable location. This does not include modifications or locations that just mentioned in-game or shown on an in-game television etc.

Liberty City, based on New York City, is a location that has appeared in GTA 1, GTA III, GTA Vice City, GTA San Andreas, GTA Advance, GTA Liberty City Stories, GTA IV and GTA Chinatown Wars. It is generally depicted as a large city with a sizable population (4 million in GTA III, double that in GTA IV), featuring a complete transportation infrastructure of roads and railways, and is located on a geographical configuration of shorelines and islands, similar to that of New York City. The city has been described as one suffering heavily from crime and corruption, with the presence of organized crime, feuding street gangs, petty criminals, and rampant misconduct among city officials and law enforcement. Due to its ever-growing crime statistics (the highest in the U.S.), it has been repeatedly voted as "The Worst Place In America".

New Guernsey, based on New Jersey, is a location that appeared in GTA 1. It consists of Guernsey City (based on Jersey City), Fort Law (Fort Lee), Schlechberg (Gutenberg), Hackenslash (Hackensack) and Eaglewood (Englewood).

In Grand Theft Auto IV, New Jersey was used as a location again, alongside Liberty City, but was renamed to Alderney. Although Alderney is an entire state, it appears to be the size of a borough (about the same size as Algonquin), and is treated as a borough of Liberty City (although this may be due to technical limitations—Alderney foot police, for example, are seen wearing different uniforms to the LCPD, although LCPD vehicles patrol Alderney). Alderney contains neighborhoods that are based on different cities and regions in New Jersey, such as Weehawken, Inglewood, Jersey City, Newark, Kearny, and Elizabeth, among others. 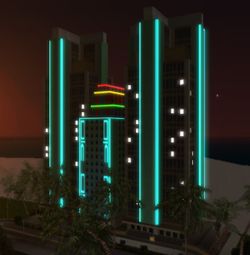 Vice City is the setting in GTA 1, GTA Vice City and GTA Vice City Stories. It is based on Miami, Florida. In the GTA III era games, it consists of two major islands and six smaller islands; both main islands separated by a large body of water similar to that of Biscayne Bay (separating Miami Beach from mainland Miami). Each major island is divided into several districts. The population of Vice City is given as around 1.8 million. Unlike Liberty City and the state of San Andreas, Vice City has no railway or rapid transit systems, and all islands are connected by road and pedestrian bridges.

In the games, Vice City is based on Miami, but it has been confirmed to be in the real state of Florida, therefore it's possible that Vice City replaces Miami within the GTA World; however, "Miami" was mentioned in a cut scene and various billboards in GTA III, leaving Miami's presence in the GTA world ambiguous at best. 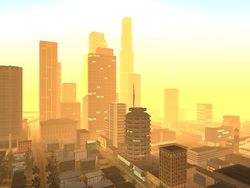 San Andreas, which is intended to be based in the West Coast of the United States, has appeared as four different entities in the Grand Theft Auto (GTA) series of video games.

Los Santos is the largest city in San Andreas. It is based on real life Los Angeles, California. It borders Red County to the north and Flint County to the west. 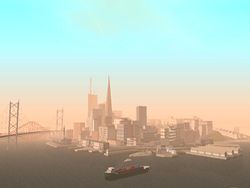 Las Venturas is based on Las Vegas, Nevada. Like its real life counterpart, Las Venturas is a gambling city located in the desert region. The city is also notable for its sizable freeway system.

Anywhere City is the setting of Grand Theft Auto 2. It is presumably called this as it is set in the near future, and doesn't bear any resemblance to any real life city in particular. It is divided into three separated parts - Commercial, Residential and Industrial (similar to the nature of the three main districts in GTA III). The infrastructure of Anywhere City is primarily composed of roadways and footpaths, but in later versions of the game released for the PC, a light rail transit system was provided. 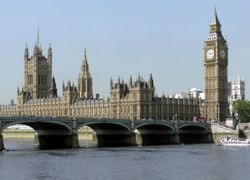 In GTA IV, Gay Tony mentions that he has clubs in London, and some pedestrians in GTA IV have British accents.

North Yankton is a state, based on North Dakota, and is featured in GTA V. It contains the small town of Ludendorff, where the missions Prologue and Bury the Hatchet take place.

These locations do not feature in any GTA game, but are mentioned or shown. These could be mentioned by characters, posters, radio stations, television or anything else.

Cities/states within the United States of America

Rest of the World

Retrieved from ‘https://www.grandtheftwiki.com/index.php?title=Grand_Theft_Auto_World&oldid=396321’
Categories:
Cookies help us deliver our services. By using our services, you agree to our use of cookies.