Designed as a two-door sports coupe, the Jester is based on the 1993-2002 Toyota Supra, although GTA San Andreas was set in 1992, and the vehicle's front end is elongated. It also bears a resemblance (and probably based on) to the Ferrari 348, which was sold during from 1989-1995. As it is considered a tuner, it can only be modified at Wheel Arch Angels. It feels and sounds as if powered by a V6.

Released as part of the Business Update, the Jester, manufactured by Dinka, is heavily based on the 2015 Honda/Acura NSX concept. The headlights resemble those of ninth generation Honda Civics, and to an extent, the car bears some similarities to the BMW i8. The taillights are similar to those of the Aston Martin One-77 (which also form the basis of the NSX's taillights), albeit compressed.

Unlike the Supra, the Jester in GTA San Andreas is front-wheel-drive, yet retains its sporty qualities. In acceleration, speed, handling, and braking, the Jester is inferior to most other sports cars and tuners in the game, superior only to the Euros. However, the vehicle still possesses good grip and braking, ideal for sharp cornering using the brake or handbrake.

With a large power output, the Jester features a good top speed and acceleration, comparable to other sports cars in its class. Being based on a Japanese sports car, the Jester has a very sensitive and responsive steering. As it is agile, it can perform skillful and quick moves if used correctly. However, the Jester tends to be drift-happy if driven on dirt roads. Crash deformation is good, and the Jester can survive multiple front end hits without deforming the front wheels. Without special abilites and modifications, the Jester has a rather low top speed of 113 mph (182 km/h). With special abilities and modifications, the Jester can reach 180 mph (290 km/h). 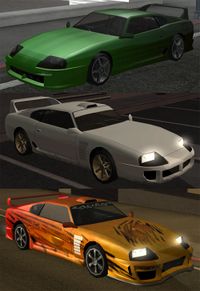 Possible combinations of modifications that can be given to Jester's at Wheel Arch Angels in GTA San Andreas.

The Jester can only be modified at Wheel Arch Angels in Ocean Flats, San Fierro.

Retrieved from ‘https://www.grandtheftwiki.com/index.php?title=Jester&oldid=415630’
Categories:
Cookies help us deliver our services. By using our services, you agree to our use of cookies.