The Stratum's design, performance, and its likely V6 engine suggest that it is derived from the fifth generation (1994–1997) Honda Accord wagon; however D-pillars have been added. The car's real-life counterpart fails to fit in the game's time setting (1992).

The car is a gang car preferred by the San Fierro Triads.

Acceleration and speed are surprisingly good, considering the Stratum’s size. The engine is most likely a powerful V6, and the drivetrain is rear-drive, making the Stratum a good selection as a drive-by vehicle. The body is weak, however, making the car susceptible to intense damage from high-speed impacts and heavy gunfire. 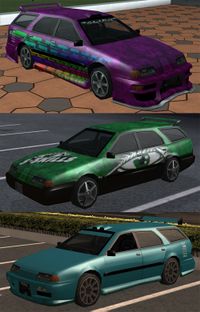 Possible combinations of modifications that can be given to Stratums at Wheel Arch Angels in GTA San Andreas.

The Stratum is considered a tuner, and can be upgraded at Wheel Arch Angels in Ocean Flats, San Fierro.

In GTA IV, the Zirconium Stratum 2.6 GT still takes its primary inspiration from the fifth generation Honda Accord station wagon (with the same added pillars as the previous rendition), albeit with a front end derived from the R32 Nissan Skyline, the rear end loosely resembles the first generation Subaru Impreza station wagon, and C-pillars which may be derived from the 1996-2001 Toyota Camry wagon. The game's Stratum may appear in two forms, the standard model or the "Twin Turbo" variant, which features an additional spoiler over the rear windscreen and a "Twin Turbo" badge in the rear. The GTA IV rendition also features an optional sunroof or luggage rails, or a subtle bodykit.

In GTA V, the Stratum appears unaltered from GTA IV.

The Stratum appears to be powered by a V6, or a high-torque inline-4 or inline-6 (hence the Skyline front end), coupled to a 5 speed gearbox in a RWD configuration. In GTA V, it now features an AWD layout, presumably a nod to said Skyline front end. Acceleration is inferior, and its top speed of 90 mph (145 km/h) is limited by its weight and poor aerodynamic coefficient.

The Stratum's handling is quite good, though oversteer can be dramatic at times, and its suspension evens out bumps without being excessively soft. Braking is acceptable, and ABS is standard on all Stratum wagons. Crash deformation is very good, with the Stratum keeping most of its shape in a collision; engine build quality, however, is less desirable, with the Stratum often left disabled after only a few impacts.

Retrieved from ‘https://www.grandtheftwiki.com/index.php?title=Stratum&oldid=415106’
Categories:
Cookies help us deliver our services. By using our services, you agree to our use of cookies.