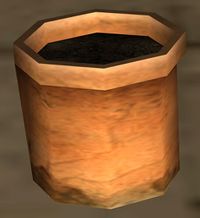 The hidden "flowerpot" vehicle, as depicted in GTA San Andreas. Note that it can only be obtained by using a trainer or a spawn tool.

The RC Cam is a small "flowerpot" that can be used as a vehicle in Grand Theft Auto: San Andreas. Although the vehicle bears "RC" in its name, it is not a remote controlled vehicle.

The RC Cam is little more than a crudely made flowerpot that nevertheless behaves similarly to a normal vehicle, featuring functional headlights and taillights that lit up at night, and being capable of generating skid marks (despite having no wheels). Nevertheless, the RC Cam still lacks an engine noise, damageable parts and a collision file (thus being partially unable to collide with other vehicles). When the player character enters the vehicle, he opens an invisible "door" and sits on it; the vehicle has capacity for two people.

Performance of the RC Cam can be described as mixed due to its very compact construction. The flowerpot is highly nimble due to its very short wheelbase and light weight, and is moderately good in speed. However, its short wheelbase also increases the possibility of the vehicle spinning out, and the low ground clearance of the RC Cam makes it more difficult to control on bumps.

It is unknown why the RC Cam is included in GTA San Andreas, or if it serves a certain function in-game (the "cam" in the model name may suggest that it is used as a camera dummy for previews and debugging, or a possible joke tool made by one of the Rockstar Team to aid in testing and implementing in-car animation). It is never used in any missions, nor can it be seen anywhere. The only means of obtaining the vehicle is via a trainer or modification.

Retrieved from ‘https://www.grandtheftwiki.com/index.php?title=RC_Cam&oldid=363748’
Categories:
Cookies help us deliver our services. By using our services, you agree to our use of cookies.