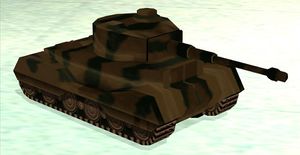 The RC Tiger is a model tank evidently fashioned after the real-world Pz.Kpfw.VI Tiger (P) VK4501(P) (Porsche Typ 101), the rare Porsche version of the Sd.Kfz.181 Pz.Kpfw.VI Tiger I tank, used by the Germans during World War II. While seemingly using continuous tracks for propulsion, the RC Tiger actually uses a set of wheels hidden behind the static tracks; these features can be seen if it is accessed using a modification or driven on bumpy terrain. Because of its origins, the RC Tiger is the only vehicle in the game not to have a fictitious name. Its performance is actually similar to that of the RC Bandit, with a low speed but responsive controls.

The RC Tiger does not appear outside "New Model Army" for Zero, where it is used by the player's opponent, Berkley, on a model battlefield. The vehicle can only be obtained and accessed through the use of modifications.

Retrieved from ‘https://www.grandtheftwiki.com/index.php?title=RC_Tiger&oldid=363747’
Categories:
Cookies help us deliver our services. By using our services, you agree to our use of cookies.