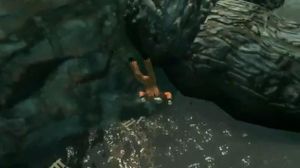 O'Malley before hitting the water at the bottom of the cliff.

Aiden O'Malley (inmate number 466369) was a 55-year old Dukes-born Irish-American linked to criminals in Ireland and Dukes. He was an associate of Derrick McReary and Bucky Sligo, whom he often worked with. O'Malley, who spoke with an Irish accent, had spent most of his adult life in Ireland and Britain, linked with several paramilitary and terrorist groups.

In 1995, O'Malley was convicted for a string of robberies, based on testimony from McReary (who supposedly did not remember giving evidence), and was serving a twenty year prison term. Whilst inside, O'Malley complained about McReary's part in his incarceration, and his friend Sligo threatened the lives of McReary's family, much to McReary's distress. In 2008, O'Malley offers information which may lead to arrests, and gives testimony at a police station in Algonquin. The McReary brothers plan a hijacking of the police van transporting him back to Alderney State Correctional Facility; Niko Bellic and Packie wipe out the van's police escort in the Booth Tunnel, and they commandeer the van with O'Malley inside. After taking the van to Alderney and successfully evading the police, Packie and Niko bundle a grateful O'Malley into a less conspicuous vehicle and drive him to the cliffs in Leftwood. O'Malley is told that he was freed on the orders of Derrick McReary, much to O'Malley's disgust. Packie has Niko shoot O'Malley, whose body then falls down the cliffs. The police eventually recover and identify his body.

Affiliations: Linked to Criminal Underworld in Ireland and Irish American criminals based in Dukes.

Retrieved from ‘https://www.grandtheftwiki.com/index.php?title=Aiden_O%27Malley&oldid=389889’
Categories:
Cookies help us deliver our services. By using our services, you agree to our use of cookies.