The formation of the Los Santos Vagos is shrouded in mystery. They likely evolved from either East Beach, Los Flores, East Los Santos or Las Colinas. History regarding their gang wars with the Grove Street Families and the Varrios Los Aztecas is also unknown - likely due to aggressive territorial expansion and crack-cocaine influence. Their hostilities towards the Grove Street Families has increased over the years due to their weakening - which the Vagos see as an opportunity to possibly take over. The Vagos also have a dislike of the Ballas; again, it is unknown as to why.

Prior to 1992, they controlled northern East Los Santos. This is evidenced by CJ's reaction to OG Loc directing CJ to northern East Los Santos to find and kill Freddy during the mission OG Loc. CJ states, "Ain't this Vagos' hood?". This is due to CJ being away from Los Santos for five years and not been knowledgeable on the current situation of the gangs. During 1992, the area is actually controlled by the Ballas instead. Likewise, a Vagos gang house remains in the area - which is destroyed during the mission Burning Desire.

Since northern East Los Santos was once part of Vagos territory before falling under Ballas control in 1992, there must have been either a gang war or an agreement between the Ballas and the Vagos at some point.

The Los Santos Vagos also had a strong rivalry with the San Fierro Rifa prior to 1992. However, they form an agreement to cease hostilities for the interest in the drugs trade (especially crack cocaine) in relation to Big Smoke's crack empire. 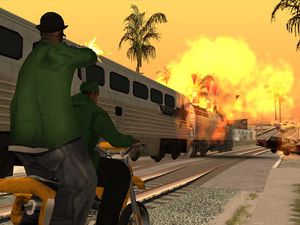 During the events of the game, the Vagos are seen as a secondary threat to CJ and the Grove Street Families (after the Ballas). However, their main enemy is the Varrios Los Aztecas. They are one of the largest and most ruthless gangs in Los Santos upon CJ's return. They also become heavily involved and influential within the crack-cocaine drugs trade. The Grove Street Families and the Vagos fight for control over both East Beach and Playa del Seville.

The Vagos are first seen in the storyline during the mission Catalyst, which sees Carl and Ryder stealing weaponry and ammunition from a train, and having to kill a number of Vagos and Ballas gang members to get them. Then, during the OG Loc mission, Carl and OG Loc chase Vagos gang member Freddy across parts of Los Santos before being confronted by more Vagos gang members (whom are all killed by Carl). Big Smoke appears to be having problems with the Vagos gang, and along with Carl, meet two Vagos drug dealers, who have Smoke's drugs, in the mission Running Dog. After failing to hand the drugs back to Smoke, one is injured after Smoke sneaks up from behind and swings at the gangster with a baseball bat and the other is chased down and murdered by Carl. Then Smoke hears from Frank Tenpenny that the Vagos and San Fierro Rifa are cutting a drugs deal at Unity Station. Four Vagos gang members jump onto the train just leaving the station, and are chased and killed by Smoke and Carl. Officer Frank Tenpenny and C.R.A.S.H. also has issues with the Vagos, and sends Carl to burn down a Vagos gang house in East Los Santos, in the mission Burning Desire.

After the mission The Green Sabre, the Los Santos Vagos take control of what had previously been Varrios Los Aztecas territory - including El Corona, Little Mexico and Unity Station. With the Ballas, they become extremely powerful and influential after the downfall of the Grove Street Families and the Varrios Los Aztecas. Alongside the Ballas, the Vagos control the streets of South Central Los Santos.

The Los Santos Vagos are then hired by Big Smoke as protection and security for his crack empire. In doing so, they also work with the San Fierro Rifa, Russian Mafia and the Ballas without hostilities for the interest of drugs. However, Vagos and Ballas will still fight on the streets.

The Vagos remain in the Aztecas territories until Carl and Cesar return to Los Santos, and they reclaim El Corona as Aztecas territory in the mission Los Desperados. The Vagos are then forced to leave Little Mexico, Unity Station and El Corona, and return to their north-eastern territory in the city. The Vagos appear during the final mission to provide protection for Big Smoke alongside the Ballas, San Fierro Rifa and the Russian Mafia - but are all killed by CJ.

If the player chooses, they can take over all of Vagos territories in Los Santos through the gang war mini-game (as with the Ballas), thus ending the Vagos gang for good, and they will never appear in the game again.

The Vagos do not make a prominent appearance in the main storyline for Grand Theft Auto V, however they are present for a few missions, and are easily located in Los Santos.

They appear more in Grand Theft Auto Online, involved in multiple drug deals that the protagonist interrupts for various criminals in Los Santos and Blaine County. At one point the online protagonist(s) rescues former Vagos member Gustavo Mota from a prison bus while he's being transferred to Bolingbroke Penitentiary. He is later available as a heist member in GTA V.

In the GTA V mission Repossession, Simeon Yetarian tasks employee Franklin Clinton to repossess a Bagger from Vagos member Esteban Jimenez in Vespucci Beach. Franklin ends up in a gunfight and escapes with the vehicle.

In the second Rampage Trevor approaches two Vagos members conversing with each other in Strawberry, Los Santos. The two Vagos get up in Trevor's face, asking what he's doing here and where he's from. Trevor gets defensive about his slight Canadian accent, and the three end up in a struggle. Trevor takes the Micro SMG from the holster of one of the Vagos, and the two gangbangers flee while Trevor proceeds to murder at least thirty members.

The gang is also mentioned by Steve Haines in The Underbelly of Paradise on television.

The Los Santos Vagos are a Hispanic street gang that have been described as "extremely dangerous". They are the largest Hispanic street gang and the 2nd most powerful overall street gang in Los Santos in 1992 (after the Ballas). They are involved in drug trafficking/manufacturing (especially crack cocaine), gang-banging, gang warfare, murder, vandalism, protection, and street violence. The Vagos are easily identifiable by their yellow bandanas, 90's "cholo" style clothing, and their many gang tattoo's. They are predominantly located in the far east and north of the city - within the poorer and more run-down neighborhoods of South Central Los Santos.

There are three different Vago skins that walk and drive around their territories in GTA San Andreas:

They are fierce rivals of the other Los Santos Mexican gang, the Varrios Los Aztecas, and are also enemies with the Grove Street Families and the Ballas. They're affiliated with the San Fierro Rifa, who were former enemies until the Rifa joined the narcotics business. They briefly affiliate with the Ballas and the Russian Mafia to act as protection for Big Smoke's crack empire.

The Vagos pose a threat to GTA San Andreas' protagonist Carl Johnson, and will react with hostility to CJ if they see him - especially when wearing green clothing. The Vagos may also sometimes question CJ's gang-banging status, if the player chooses to respond positively - the Vagos will attack.

The Vagos are known to be extremely violent and will often attack in very large groups from numerous directions in an attempt to swarm and flank their enemies as part of their strategy. Most of their territory consists of close-quarter areas with numerous alleyways and shortcuts which aids them to do this. The Vagos are involved in Gang-banging, robbery, street violence, murder, gang-related homicide, gang warfare, drug dealing/manufacturing (especially the crack cocaine trade), gun running/arms dealing, and vandalism.

The Vagos appear to be the least armed gang in Los Santos, evidenced by the fact that members only carry the pistol and Micro-SMG. However, at the same time - they are one of the largest - and they use their size to their advantage. This contrasts to their primary enemy - the Varrios Los Aztecas, which function in the complete opposite way - they are the smallest but one of the most heavily armed. This puts the Aztecas and Vagos on equal footing in terms of power. However, the Vagos are equipped with better firepower during some missions and gang wars. Members are often seen drinking beer and smoking marijuana while hanging in groups or driving around their territory. Vagos will also often flash Vago gang handsigns.

Upon spotting a Balla, Grove, Azteca, Da Nang Boy, San Fierro Triad, or Italian Mafia member on their territory - they will often get into a violent confrontation (especially if Aztecas).

Interestingly, unlike the Afro-American gangs; the Vagos do not divide themselves into different sets. Instead, they operate as one large gang.

The Los Santos Vagos drive moderate cars, and the only four door vehicle that is suited for drive-bys is the Oceanic, as with the Oceanic, the Vagos also drive the Hermes and the Tornado. The Oceanic and Tornado are common in this territory. However, if the player takes over all the territories, then the Oceanic and the Tornado become extremely rare and will only appear in Vigilante or Firefighter missions unless the player modifies the cargrp.dat file. The radio stations that the Vagos listen to are K-DST and Master Sounds 98.3.

Gangs in the Grand Theft Auto series
Grove Street Families
Retrieved from ‘https://www.grandtheftwiki.com/index.php?title=Los_Santos_Vagos&oldid=415437’
Categories:
Cookies help us deliver our services. By using our services, you agree to our use of cookies.