Anthony Corrado is a character in the HD Universe and the 28-year old bodyguard and long time associate of the Pegorino Family led by James Pegorino in Grand Theft Auto IV. Pegorino claims to have raised Corrado like he was his own son after his son committed suicide. He (and his wife) even go so far as to abuse and berate him as if he were their son. 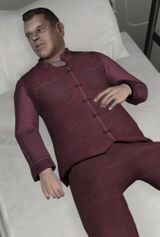 Anthony Corrado as a hospital patient during "Flatline".

Pegorino later reveals to Niko Bellic during the opening cutscene for the mission "Flatline" that Corrado had been wearing a wire and working for the FIB. Corrado suffers a heart attack earlier after Pegorino threatens him over the phone, and is placed under maximum security at Westdyke Memorial Hospital in Leftwood, which Niko Bellic is forced to infiltrate in order to silence him. He dies after Niko shuts down his life support or kills him in his hospital bed by other means.