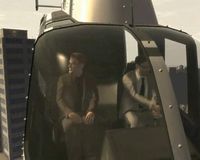 Eduard Borodin was a Russian businessman and megabillionaire who was financing terrorists in Liberty City. The organisation United Liberty Paper discovered his activities and had Niko Bellic and "Little" Jacob Hughes destroy the helicopter he is flying in, which occurs over water due to United Liberty Paper's instructions that there be no civilian casualties. An article about his death is written on the Liberty Tree website. Said article claims that he attempted to buy a section of Middle Park to build a mega-mansion, and when denied by mayor Julio Ochoa he took his fatal helicopter ride to look for somewhere else to build it, and was also discussing buying the Liberty City Cocks. He was first seen being escorted in a Helicopter leaving the Civilization Committee, and Niko had to gun down his thugs guarding it in order to steal it. Later, you're required to follow him escorted in another helicopter in the helicopter you took and have Little Jacob destroy his helicopter with an RPG in southern Algonquin, with Niko flying.