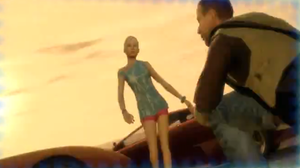 Miranda Cowan is a celebrity that was featured in The Ballad of Gay Tony on Fizz! and in Grand Theft Auto V. She is known by the paparazzi as "The Silicone Slattern".

"Sightseeing and Celebrity" on the GTA V website features an article about her, in the fictional magazine Prattle. She is again referred to as "The Silicone Slattern", and made a scene in a Los Santos strip club. She's had several younger, 25-year-old boyfriends. Cowan is 39 years old as of GTA V, with a very different appearance than in The Ballad of Gay Tony. She has short, jet black bobbed hair, which bears a striking resemblance to Kris Kardashian Jenner. In Paparazzo, Franklin Clinton and Beverly chase her in a limousine while she is having sex with a film director.